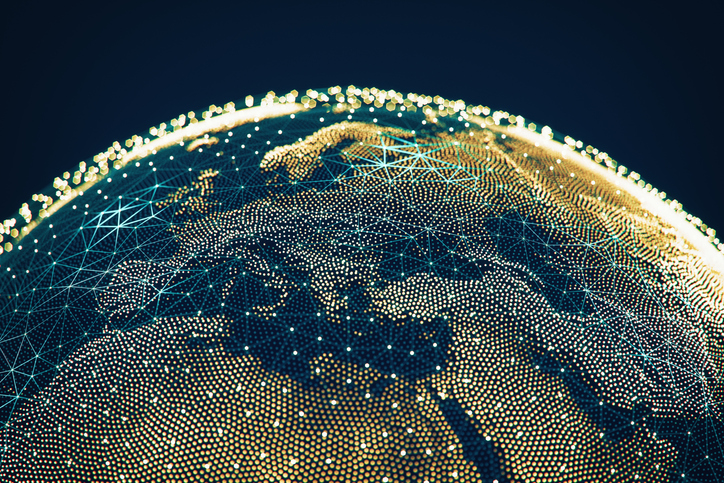 Cryptocurrencies have taken the world by storm. More than 2,500 different cryptocurrencies now exist, and large corporate players, such as PayPal and Tesla, are building up vast cryptocurrency reserves. Bitcoin has outperformed every other asset class since its creation in 2009. In the last 12 months alone, it has exploded from under $10,000 per coin to nearly $50,000.

Cryptos operate on what is known as blockchain technology. Blockchain is essentially an unchangeable “archive” that records all the transactions carried out on the network, which can be either public or private. With a public blockchain like Bitcoin, the data is visible to anyone. To validate the transactions on the blockchain, it requires a network of computers known as “nodes” to verify transactions’ authenticity, but once such a data point is created, it can never be removed. Using radical transparency and technological innovation, blockchain will revolutionize the Internet, finance, insurance, transportation, personal identification, healthcare, and many other areas of life.

Lately, however, more and more blockchain projects are emerging with a specifically environmental focus. For example, Steve Wozniak, a co-founder of Apple, founded a new company called Efforce. According to Wozniak, one of the most effective ways to tackle climate change is by improving energy efficiency. Unfortunately, companies sometimes struggle to make upfront investments in efficiency upgrades, despite those upgrades’ long-term benefits. Efforce is essentially a digital marketplace that connects such companies with willing investors, allowing the former to raise cash for efficiency upgrades, such as switching to LED lighting or insulating their buildings. Using smart contracts, which are inviolable, self-executing contracts based on predetermined terms of agreement, the energy cost savings that result from the upgrades then partly flow back to the original investor in the form of a cryptocurrency token called WOZX.

Similarly, companies like Lo3Energy and SunContract use blockchain to create consumer-centric, localized energy markets that overcome the vast inefficiencies of traditional, centrally-run power grids. By connecting customers and providers in real-time using decentralized blockchain data, energy is dispatched and used much more efficiently at the local level, syncing up supply and demand in a way that centralized grids are incapable of.

But energy efficiency isn’t the only application of blockchain to environmental sustainability. For example, blockchain can align the incentives for recycling by matching trash collection with financial rewards. Social Plastic is an organization that has set up plastic collection centers across the developing world. Individuals in these countries collect trash and exchange it for digital tokens that, in turn, can be exchanged for goods such as food, fuel, water, or other things. Crucially, they can log their transactions on the Social Plastic blockchain via their mobile phone, ensuring complete fairness and transparency. The collected plastic is then recycled to make new products.

Furthermore, while the mining of cryptocurrencies on a blockchain is very energy-intensive in and of itself, requiring enormous computer processing power, here too innovation is making strides. HydroMiner, for example, is a company that operates two profitable crypto mining facilities in the Austrian Alps, which run off locally-sourced hydro energy. Meanwhile, Soluna is in the process of building a 37,000-acre renewable wind farm in Morocco, as well as operating other facilities around the world, in order to cleanly mine bitcoins. There is an enormous opportunity for the impending blockchain revolution to be powered by clean energy, including small modular nuclear reactors that could be sited at mining locations.

Governments, too, are now realizing the value of blockchain. In Germany, the Free Democratic Party (FDP) has proposed issuing a new cryptocurrency named Arbil. Pegged to a nominal $30 per ton carbon price, the coin would be paid out to individuals and businesses that actively reduce or remove carbon emissions, certifying their environment-protecting activities. The Republic of San Marino is developing its own coin called the San Marino Innovation Token, which pays people for environmentally beneficial practices such as waste management or water conservation. Even the United Nations is getting involved: it is working with ClimateTrade, an organization that uses blockchain technology to connect investors with carbon-reducing projects around the world, essentially creating a carbon offset marketplace.

But what makes blockchain technology so uniquely well-suited to these projects? There are three main reasons why blockchain and cryptocurrency projects are able to accelerate innovation and environmentally-friendly business models.

Transparency: As mentioned, blockchain technology is fully transparent. Every transaction has a unique identifier, and its associated value is visible to anyone that accesses the system. That means that investors can track whether their money is actually going toward the project they’re paying for, thus ensuring supply chain integrity and preventing corruption.

Speed: Thanks to blockchain technology, transactions guarantee faster implementation and reduced latency, making the entire process much more efficient. Rather than operating via slow, cumbersome banks or central servers, the process is decentralized and pretty much immediate. That means that both money and information flow faster from buyers to sellers, creating a direct and tangible profit motive for environmentally friendly activities.

Cost-Effectiveness: Due to its high-tech and decentralized nature, blockchain cuts out the need for trusted “third-parties” or middlemen, reducing the costs involved in verifying transactions. That makes verification, a key problem in many environmental projects, much easier and cheaper to carry out.

This triad of transparency, speed, and cost-effectiveness spells a new and innovative future for everything from finance to environmental protection. Ultimately, the story of blockchain technology is one of human progress. As much as it will improve human life in countless ways, it will also benefit the environment. From boosting energy efficiency and creating carbon markets, to optimizing supply chains and incentivizing practices such as recycling and waste management, blockchain is yet another example of how innovation can help improve the planet.