Today marks the 27th installment in a series of articles by HumanProgress.org titled, Heroes of Progress. This bi-weekly column provides a short introduction to heroes who have made an extraordinary contribution to the well-being of humanity. You can find the 26th part of this series here.

This week our hero is Kate Sheppard, the world’s first successful suffragette. Sheppard’s tireless work and petitioning of New Zealand’s parliament in the latter half of the 19th century is largely credited for the nation becoming the first country in the world to grant women the right to vote in 1893. After New Zealand embraced universal suffrage, Sheppard inspired successful suffrage movements in other parts of the world. Today, women have a vote almost everywhere.

Kate Sheppard, née Catherine Wilson Malcom, was born on March 10, 1847 in Liverpool, England. After her father died in 1862, Sheppard moved to live with her uncle, a minister of the Free Church of Scotland, in Nairn. Sheppard’s uncle taught her the values of Christian socialism that would stay with her the rest of her life. Although the precise details of Sheppard’s education aren’t known, she possessed an extensive knowledge of both science and law.

In the late 1860s, Sheppard, accompanied by her mother and sister, moved to Christchurch, New Zealand. Sheppard quickly became part of Christchurch’s intellectual scene and befriended Alfred Saunders, a politician and prominent temperance activist who helped to influence her ideas on women’s suffrage. Sheppard married Walter Allen Sheppard, a shop owner, in 1871.

Sheppard was an active member of various religious organisations. She taught at a Sunday school and was elected secretary of the Trinity Ladies’ Association, an organization established to visit members of the parish who did not regularly attend church service, in 1884. In 1885, Sheppard became involved in establishing a Christchurch branch of the international Woman’s Christian Temperance Union.

Sheppard’s interest in political activism started largely due to her interest in temperance. In the late 1880s, she began drafting and promoting petitions to New Zealand’s parliament that would prevent women from being employed as barmaids. After parliament rejected Sheppard’s barmaid petition, she came to believe that politicians would continue to reject petitions put forward by women, so long as women did not have the right to vote.

In 1887, Sheppard was appointed National Superintendent for the Franchise and Legislation for New Zealand Women’s Christian Temperance Union (WCTU). By 1888, she was the President of the Christchurch branch of the WCTU. Sheppard quickly became a prominent figure of the women’s suffrage movement, and she proved herself as a powerful speaker and organizer by hosting political events across New Zealand.

In both 1887 and 1890, there were failed attempts by politicians sympathetic to Sheppard’s cause to introduce legislation that would grant women the right to vote. In 1888, Sheppard wrote a pamphlet titled Ten Reasons Why the Women of New Zealand Should Vote, which was sent to every member of the House of Representatives. She also wrote pamphlets that were sent to suffrage movements across the world.

In 1891, Sheppard started making parliamentary petitions to persuade politicians to support vote for women. In the same year, Sheppard created a petition that contained 10,085 signatures. Sir John Hall, a member of the House of Representatives and a supporter of Sheppard, presented the petition to parliament alongside a proposed amendment to the existing Electoral Bill that would allow women the right to vote. This amendment passed in the House of Representatives, but was rejected in the Upper House.

In 1892, Sheppard created another petition with 20,274 signatures, but the female suffrage amendment once more failed in the Upper House. Eventually, with a petition of 31,872 signatures, which was then the largest petition that the New Zealand parliament had ever received, The Electoral Bill of 1893 passed. The enfranchisement of women was signed into law by Governor David Boyle on 19 September 1893.

Sheppard was widely credited for the 1893 Electoral Bill. Seeing the success of the suffrage movement in New Zealand, women’s suffrage groups around the world were inspired to follow in her footsteps. Sheppard sent her writings to suffragettes all over the world. As editor of the WCTU’s monthly journal The White Ribbon, she promoted suffrage groups abroad.  Sheppard was in enormous demand on the speaking circuit. Before moving to England in 1903 to assist in the suffrage movement there, she made speeches in Canada and the United States. 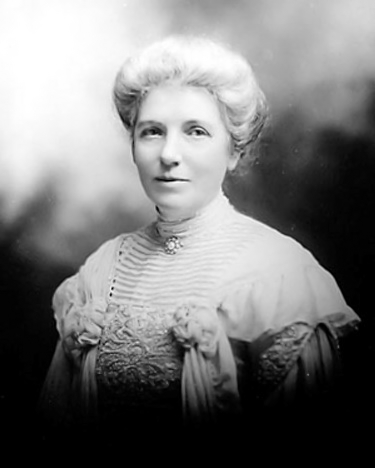 Due to her failing health, Sheppard moved back to New Zealand in 1904, but embarked on a tour of India and Europe a few years later. In 1916, she was the first person to sign a petition urging Sir Joseph Ward, the Prime Minister of New Zealand, to support enfranchisement of women in Britain. Suffrage movements throughout the world copied Sheppard’s tactics with enormous success. Australia granted women the right to vote in 1902, Finland in 1906, Norway in 1913, Denmark in 1915, and Austria, Britain, Germany, Poland and Russia in 1918. The United States followed in 1920.

The trend continued long after Sheppard’s lifetime. Switzerland granted women the vote in 1971, with one canton holding out until 1991. Saudi Arabia first allowed women to vote in 2015.

Sheppard died in Christchurch on 13 July 1934. She was 86 years old. Today her profile is featured on the New Zealand ten-dollar note and she continues to be considered the world’s first successful suffragette. Without her tireless work, it is likely that billions of women around the world would have to wait longer to achieve the political rights  that they enjoy today. For these reasons, Kate Sheppard is our 27th Hero of Progress.